END_OF_DOCUMENT_TOKEN_TO_BE_REPLACED

Yet another new neglected alien Rumex in Belgium: Rumex fueginus.

Rumex is a surprisingly poorly known genus in Belgium, especially with regard to its non-native representatives. In the past years several different taxa have been reported as “new” although some of them were already collected more than a century ago (for instance Rumex stenophyllus) (see Verloove 2008). Further new alien species include Rumex cristatus, R. kerneri and R. pseudonatronatus, while R. longifolius has been confirmed lately from several different Belgian localities (Verloove, in press).

Yet, Rumex remains exceedingly difficult in terms of taxonomy and identification and many species are much alike. Therefore, other new species – mostly so-called look-alikes – are to be expected in Belgium. In the present note, the American Rumex fueginus Phil. is briefly presented, a recently discovered relative of native Rumex maritimus.

In August 2012 I came across several populations of a rather aberrant form of Rumex maritimus in the port area of Zeebrugge (prov. West-Flanders, Belgium). They caught my attention because plants turned dark brownish-red after flowering instead of golden. On closer examination more differences became evident: the entire plant was densely papillose (especially inflorescence branches and lower side of leaves) and leaves had distinctly wavy (undulate) margins and were truncate to slightly cordate at base. These characters readily distinguish New World members of Rumex subsection Maritimi from its Old World representatives (see Mosyakin 2005).

In the table beneath morphological features mostly encountered in standard floras to distinguish between Rumex fueginus and R. maritimus are opposed:

In the New World – where Rumex maritimus is a very rare introduction – the separation of both species is straightforward (Mosyakin 2005). However, in northern Europe plants with more or less intermediate features have been encountered, also in natural (coastal) habitats (especially in Denmark; see Karlsson 2001). In this area Rumex fueginus and R. maritimus grow sympatrically since several decades and they possibly intergrade. Therefore, Rumex fueginus is reduced to subspecies rank under the latter in Flora Nordica (Karlsson l.c.). The plants observed in the port area in Zeebrugge perfectly match genuine Rumex fueginus.

In the port of Zeebrugge Rumex fueginus grows on bare, sandy soils (recently sand raised sites), along with, among others, Artemisia biennis, another North American xenophyte (and also more or less established in this area since several years). It was found on several different locations (in four different km-squares), often in abundance. A previous record from 2011 of an aberrant plant of Rumex maritimus (see: http://waarnemingen.be/waarneming/view/56028607; a hybrid with R. crispus had been suggested) also pertains to R. fueginus. It seems that this species is present since some time in the port area but remained unnoticed.

Belgian botanists are encouraged to look out for this species. If Rumex fueginus is present in our area since quite a long time (like in Scandinavia) than more or less intermediate plants can also be expected. The public herbaria will be critically revised in order to better understand the representatives of the Rumex maritimus group in Belgium. 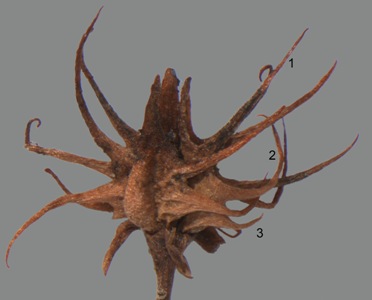 Some valves of Rumex fueginus have three teeth on either side of the valve (always two in R. maritimus)