END_OF_DOCUMENT_TOKEN_TO_BE_REPLACED

In the present treatment Malva and Lavatera are merged. The traditional generic distinction between Lavatera and Malva is based on fusion or non-fusion of the epicalyx but this character is very critical and turns out to be highly artificial and untenable (see for instance Ray 1995, Banfi & al. 2005). The relationships inferred from molecular data strongly contrast with this traditional classification (Escobar García & al. 2009). There are species in Lavatera (L. mauritanica Durieu and L. triloba L.) in which fusion of epicalyx segments differs between populations (Hinsley 2010). Some species traditionally included in Lavatera are more closely related to for instance Malva sylvestris than are some other species of Malva. These species of Lavatera – the so-called Malvoid group (Ray 1995) – were recently already transferred to Malva (Ray 1995, Ray 1998, Banfi & al. 2005, Molero Briones & Montserrat Martí 2005, Banfi & al. 2011). The remainder of the genus (the Lavateroid group) is still upheld today (Mabberley 2008), in part based on an alternative distinction of both genera on mericarp characters (i.e. malvoid mericarps with dorsal faces flat versus lavateroid mericarps with dorsal faces rounded; see Ray 1998, Escobar García & al. 2009). However, this separation is blurred by the existence of taxa with intermediate morphology (some Malva species possess fruits that are not assignable to any of the two types; Escobar García & al. l.c.). Both genera are therefore better merged or Lavatera further divided into four or up to 12 independent genera (Banfi & al. 2005, Escobar García & al. 2009, Hinsley 2010). Malva having priority, all species currently accommodated in Lavatera are better transferred to Malva (see also Stace 2010). A disadvantage of this transfer would be that Malva would become a morphologically very diverse and hardly diagnosable genus (Escobar García & al. 2009). However, the advantages of such a classification clearly prevail since Malva would then represent a single monophyletic group (Hinsley 2010). On exactly the same grounds Anderberg & al. (2007) recently merged (among others) Anagalis, Glaux and Trientalis and included them in a broadly circumscribed genus Lysimachia. See also: Verloove & Lambinon (2011).

Althaea was traditionally distinguished from Malva and related genera by six (or more) epicalyx segments. However, recent studies have shown that epicalyx characters are not informative at the generic level (Ray 1995, Davis 2010). Escobar García & al. (2009) demonstrated that the annual species of Althaea doubtlessly belong with the Malva-complex. Thus, Althaea hirsuta is here also included in Malva (see also Stace 2010). The perennial species (incl. native Althaea officinalis) are upheld in Althaea.

Previous segregates of Malva should, of course, also be merged. Some authors segregated, for instance, Bismalva Med. (see Slavík 1992), distinguished by having its flowers solitary in the leaf axils or in a congested terminal raceme (a character shared with numerous species of former Lavatera!). This distinction was obviously very artificial. In Belgium, two species were concerned: Bismalva alcea (L.) Med. (syn.: Malva alcea) and B. moschata (L.) Med. (syn.: M. moschata).

In this new circumscription, Malva counts ca. 35-40 species, some of which have become nearly cosmopolitan weeds. Four species are native in Belgium (or at least archaeophytic): Malva alcea L., M. moschata L., M. neglecta Wallr. and M. sylvestris L. At least three of these (M. alcea, M. moschata and M. sylvestris) are also grown for ornament and are regularly observed outside their native distribution range in Belgium. Especially Malva moschata is a common garden plant and often escapes (incl. white-flowered variants, cv ‘Alba’). A putative hybrid between Malva alcea and M. moschata (M. xintermedia Bor.) was recorded in 2008 in the verge of a maize field in Gutsenhoven (Heers). This nothotaxon most likely is of artificial origin and is probably never produced in the wild. It is more vigorous than either parents, intermediate in leaf shape and indumentum. Flowers occur from June till December but fruits are not produced (see also Radcliffe 2004). It is possibly overlooked. An aberrant, probably non-native form of Malva alcea is known since 2004 from a railway track in the port of Gent. It has all leaves shallowly lobed in stead of divided and probably is var. ribifolia (Viv.) Paol. Finally, alien variants of Malva sylvestris are also frequently encountered, especially var. mauritiana (L.) Thellung (syn.: M. mauritiana L., M. sylvestris subsp. mauritiana (L.) Boiss.). This taxon usually has wider and darker petals, multi-flowered inflorescences but hardly deserves taxonomic recognition. 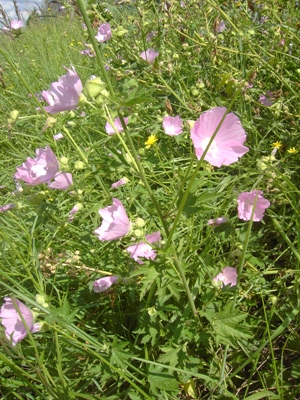 2. Carpophore much enlarged in fruit, disc-like and entirely or partially concealing the mericarps === 3

2. Carpophore not enlarged in fruit, never disc-like and entirely or partially concealing the mericarps === 4

5. Most flowers solitary in the leaf axils. Epicalyx segments distinctly fused at base (ca. for half their length). Shrub-like or herbaceous perennial, often with woody branches, rarely annual or biennial === 6

5 Most flowers in fascicles in the leaf axils (rarely some solitary). Epicalyx segments free at base or indistinctly fused. Annuals, biennials or perennials but never shrub-like === 8

8. Petals about as long as the sepals or only slightly longer (up to twice as long in M. verticillata but then with calyx distinctly closed at maturity, obscuring the mericarps) === 9

10. Calyx not accrescent at maturity. Fruiting pedicels usually more than 10 mm long. Sepals long-ciliate at margin. Angles of mericarps sharp but not with a wavy wing. Claw of petals ciliate === M. pusilla